The national number continue to rise slowly.  Before I’m ready to pronounce that we’re definitely in a rising phase, there are a couple of caveats to consider.

First, Mondays have typically been low points in the cycle for new cases, Sundays have been the low point for death.  A strong low in todays number would erase the slow rise we’ve seen.

Second, Michigan started reporting probable cases over the weekend, and that resulted in about 5,888 cases suddenly showing up in their data on a single day.  Those cases were almost all from earlier in the pandemic, but are just being officially reported now.  Michigan’s numbers have been mostly in the 200 to 500 range,  So yesterday’s numbers were around 5,500 higher than they otherwise would have been.  If you subtract that from the national numbers, yesterday would have been a record low for the period covered by my charts.

So, we’re still at an uncertain stage, despite what the graph looks like.  Michigan’s inclusion of probable cases highlights the fact that we’re only talking about reported numbers.  We don’t actually know what the true counts are or how they are trending.  Between low testing, political influence, and changing criteria, it’s difficult to get a clear, confident picture of our status.

WIth that said, here’s the national graph for cases.  (I’ve stopped showing deaths to make the graph clearer and because cases tell us more about what the future holds than do deaths at the stage.)

Today I’m going to focus on the states that are currently the most worrisome.  Here they are in alphabetical order, because that’s how my dashboard shows them.

AZ is increasing rapidly.  On May 25th they had 198 new cases.  Yesterday, June 8, they had 1538.  That represents a doubling period of around 4 days, which is about where the nation as a whole was in early April.

A month ago AR was reporting 60 cases per day, this last week has seen the majority of days over 300 and one at 450.  To make matters more concerning, the rate of increase seems to be accelerating in an exponential fashion.

CA is notable for the sheer number of cases reported.  It has been averaging over 2500 cases per day over the last week, up from around 1700 in mid May.  Its numbers don’t seem to be accelerating, but they’re still rising and are already high.  As the most populous state with multiple population centers and a very diverse set of cultures across a large landmass, it has a difficult job to reign these numbers in.

FL is the third most populous state.  It has seen about a 50% rise in daily cases over the last month.  Recently, the increase has accelerated dramatically. 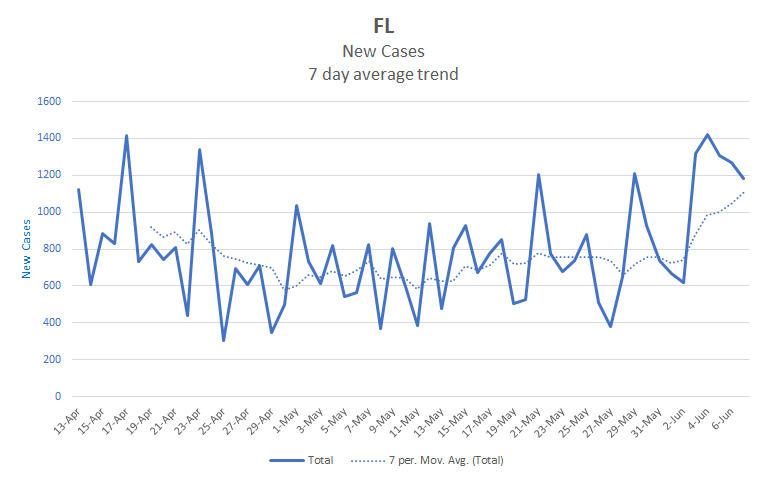 NC has been steadily rising throughout.  The fact that it never really levelled off is worrisome in itself, but its numbers have also been accelerating.  As the 9th most populous state, it has a lot of room for bad outcomes.

TX is the second most populous state.  Like CA it has diverse cultures spread out over a lot of land and multiple dense population centers.  Its numbers were in decline in late May but have since started to rise even faster than they had been.  It has seen a more than 50% rise in daily cases over the last 10 days.

The states detailed above are just the worst cases right now.  There are plenty of other states rising, and plenty declining.  Overall, more states are either steady or declining than are rising.  But the states above are big enough, and rising quickly enough, to begin driving the national numbers that we see in the headlines.  It’s worth noting that the majority of the states detailed above have large minority populations which tend to have high infection and fatality rates.  So if these states continue to rise as they are, expect fatality rates to rise also.

Please continue to be cautious as restrictions are relaxed.  Just because an activity is not prohibited does not mean it is entirely safe.  For my part, I continue to wear a mask and use curbside pickup or mail order for shopping.  I recognize and appreciate the risks that others take to allow me to use those options, but on the whole I think the community as a whole is safer with fewer people in stores milling around.  In my circumstances, these are easy things I can do to help everyone be safer, so why wouldn’t I do them?  Think about your choices and make them as wisely as you can for your specific circumstances.

One reply on “The most worrisome states”

[…] I presented a list of 6 states I thought were most worrisome regarding COVID infections.  Today, the Washington Post pointed out […]