It looks like the bulk of the data disturbance around Thanksgiving is behind us.  Both cases and deaths are at about the level we would have expected had they simply kept growing at pre Thanksgiving rates.  My expectation is that any further effects from Thanksgiving will be dwarfed by growth rates.  Let’s see where we stand.  As you look at the graph, imagine a straight line from just before the Thanksgiving dip to where we are now.  That will give you the best sense of growth rates.

The 7 day average for cases as of Dec 7 is 201159, for deaths it is 2237.  Daily deaths are now equal to the height of the spring surge.  By tonight they will be higher.  Every 5 days another million people are infected and eleven thousand people die.  If we continued this rate until the end of the year, we would see an additional 4.6 million cases, bringing our total to nearly 20 million.  We would add over 50,000 deaths for a total of greater than 330,000. The total population of the US is around 330,000,000 so in 10 months, one out of every thousand people in the country would have died of COVID.  To put this in perspective, this is roughly the same percentage of the population as US soldiers who died in WWI, but in about half the time.  In WWI, about three times the percentage of the population died, but over nearly four years.  So in terms of percentage of the US population per year, COVID deaths will likely eclipse both world wars.  Because cases and deaths are still rising, these comparisons are conservative.  (There’s a math paragraph at the end for those interested in the calculations.)

One of the biggest worries right now is ICU capacity.  As ICUs become full, and as their staff becomes exhausted and overworked, the mortality rate will increase.  Unfortunately, this will also impact non-COVID patients who need treatment.  We do not have an infinite pool of medical resources.

Fortunately, there is a good chance that the COVID epidemic in the US will be shorter than either of these wars.  Vaccines are on the way, and hopefully will be accepted by enough people to at least greatly reduce the death rate.  Social distancing, masks, and vaccination are our equivalent of the rationing and war effort that US citizens contributed in WWII.  Someone with better are skills than I have should make a version of Rosie the riveter rolling up her sleeve to accept a vaccine.

Stay safe everyone, and Do Your Part. 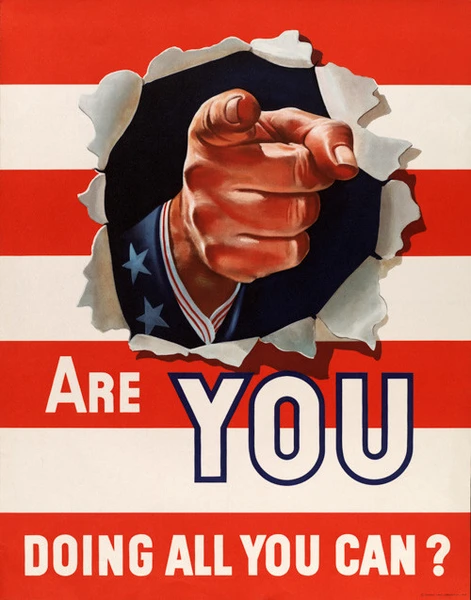